I will never forget my first car accident. I was 16 and had just completed the roundtrip journey from San Jose to Santa Cruz over Highway 17 in California; a tough drive for a beginner, through the winding mountain roads. I was at a complete stop at a red light on a freeway off-ramp back in San Jose, proud of my driving skills. I didn’t even see it coming. A car came barreling around the bend of the off-ramp and slammed into the rear right side of my car. The blow knocked my car into the middle of the intersection where I was lucky not to be hit again by the cross traffic.

The collision knocked me unconscious and my passenger suffered a hairline fracture in her cheekbone from slamming against the passenger window. I still suffer from chronic back pain that I believe came as a result of this intense crash. This car accident represented my first real experience in the insurance world.

After settling with the other driver’s insurance company, I was approached by an acquaintance, I’ll refer to him as Steven, who said: “You settled too quickly. You could have gotten much more from that insurance company.” He went on to talk about how it would have been a perfect opportunity to line my pocketbook a bit. After all, the accident sent me and my passenger to the hospital. Steven was convinced I could have found a few more “issues” that needed some monetary attention. The thought of padding my claim never crossed my mind. My medical bills were covered, I was paid the “bluebook” value for my totaled car and I received a little money for my pain and suffering.

Since joining the fraud fighting community, I have come to learn that this scenario brought up by Steven is known as opportunistic fraud.

Insurance fraud comes in all shapes and sizes. The negative impacts it has on individuals, communities, other policy holders, and of course insurance companies, are far reaching and can even end in death. This is far from the often cited “victimless” nature of the crime, an excuse used by fraudsters to justify their deviant behavior.

The opportunistic fraud I was confronted with after my car accident is just one of many fraud scenarios that can entice even the most honest and upstanding members of a community. It’s as simple as having an actual claim, such as a new dent from a fender bender, but then claiming the scratch on the rear passenger door that had been bothering you for over a year also resulted from this accident.

There are lots of problems with this line of thinking, especially if everyone acted in this way. The most direct impact is increased premiums for other honest policyholders. Opportunistic fraud may seem innocent enough, but it can easily turn into a slippery slope to more dangerous fraud schemes. For example, intentionally setting a building on fire to collect the insurance money puts the lives of the surrounding community as well as the responding fire crew in immediate danger.

The best way to address the fraud problem is to prevent it from happening in the first place. With an enormous grey zone when it comes to prosecution and resulting penalties for fraudulent activities, this is no easy task.

That being said, the following three tips provide insurance companies and other financial institutions with a place to start in their fraud deterrence strategy.

1. Be tough on fraud

Financial institutions need to demonstrate a zero-tolerance policy for fraud. This is easier said than done. Insurance companies are in a difficult position. It is impossible and unrealistic to investigate every minor incident in order to weed out the fraud. There are not enough resources for this, and honest policyholders would grow impatient waiting for their settlements due to lengthy investigations for a simple claim. They may even grow so discontent that they feel inclined to start padding their own claims to compensate for the poor service and long waiting times.

On the other hand, it is important for insurance companies to be able to detect fraud scenarios and make an example of those that are caught in order to deter future fraudulent activities. If an insurance company comes off as tough on fraud, there may not be very many honest, upstanding individuals willing to switch over to “the dark side”.

Two very recent examples in the news came from a private auto insurer in the United States. Firstly, this insurance company filed a lawsuit against an auto body shop in Arizona, claiming the shop submitted invoices for repairs that didn’t happen, as well as other falsified documents. A second recent incident shows how an investigator from the insurance company foiled a “stolen vehicle” plot after finding surveillance video of the vehicle owner being directly involved in the incident. An initial settlement of over $20,000 was stopped, and now the man faces insurance fraud and perjury charges. If I were a fraudster looking for a few extra dollars, I wouldn’t be looking in the direction of this insurer as they grow their reputation for being tough on fraud.

In order to be tough on fraud, you must be able to detect it in the first place. This requires well thought-out underwriting and claims management processes. It starts with identifying, understanding and assessing where the top internal and external vulnerabilities are within the company. Once there is a clear understanding of the potential “soft spots”, a flagging system can be created, updated, and analyzed for optimization possibilities on a continuous basis.

Two main challenges stand in the way of creating these efficient processes. Firstly, poor communication; everyone from top and mid-level managers to claims handlers, the finance department and sales representatives needs to be onboard with making the fight against fraud a priority. Without this buy-in and cross functional communication, even the simplest vulnerability assessment and flagging systems will fail. Secondly, there is just too much data within underwriting and claims scenarios to manually process and make fast, informed and intelligent decisions without the support of IT.

3. Use today’s available technology to optimize these processes

Terrible processes will not improve simply by purchasing the most advanced IT solution and calling it digitalization. Hence, it is important to first have clear processes documented with assigned cross-functional responsibilities, then use today’s technology as a decision support system on a claim-by-claim basis. This decision support system can aggregate data, for example in a claims process, on individual policy holders. The process design can look like this: 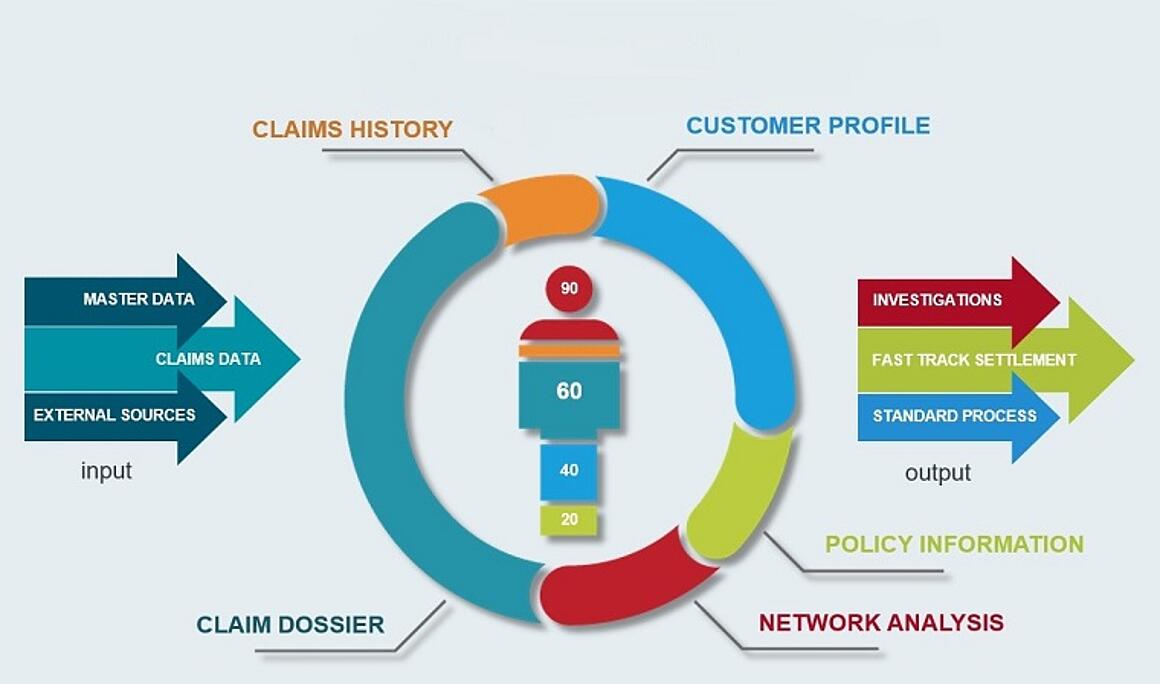 Here, in an oversimplified example, we see a claim dossier from John Doe, as portrayed in the middle of the circle. Today’s technology allows for the real-time assessment of this claim by leveraging the available data on the policyholder such as claim history, customer profile, policy information as well as external data, for example from the National Insurance Crime Bureau (NICB). If John Doe is a longstanding customer with multiple policies in place, and the $350 claim he is filing is the first in five years, there is a good chance his claim can be fast-tracked. If John is, however, a known offender and was recently added to the NICB database, his individual risk score may be much higher and an investigation into the claim may ensue. These examples are quite binary. Today’s technology allows for quick and intelligent decisions, even for all the grey zones between “honest John” and “NICB John.”

Imagine trying to process this information manually, keeping due diligence track records up to date for each policy holder in real-time. Impossible!

Insurance companies need to be tough on fraud in order to deter future schemes and attacks. In order to do this, efficient and effective processes need to be in place, supported with today’s available technology. The benefits of having a system in place that can, in milliseconds, identify if a claim can be fast-tracked, run a normal course or requires an investigation, are obvious; Claims processes can be sped up, customers will in turn be happy, and fraudsters will be deterred due to a company’s strong capability to detect and prevent even the most elaborate fraud schemes.

What tips do you have for deterring fraud in the insurance industry?