Aachen, Germany, 05th August 2015 - Can logistics do without social media? Are social media already applied in logistics? What are the benefits, what are the challenges? INFORM got to the bottom of these questions in its second online survey "Social media in logistics". The inquiry of 117 logistics experts indicated that interest in social media is on the rise. At the same time, results showed a great need to catch up on the technology. While 63 percent of the respondents describe the application of social media as "indispensable", 60 percent identify the lack of expertise as the major obstacle to effective implementation. Representatives from various industries participated in the survey from January until April 2015. Over 50 percent of responses came from the automobile, engineering, and wholesale sectors. The chemical, pharmaceutical, metal, consumer goods, grocery, textile, consulting, service and IT industries were also all represented in the survey.

62 percent of respondents reported their companies use social networking services for professional purposes. The emphasis is on communication fields, such as public relations, marketing and customer relationship management. Many of the recipients envision a broad spectrum of target groups which could be addressed using social media. 66 percent favor a direct end user communication, 46 percent want to directly communicate with customers from industry and trade. Only 6 percent do not want to use digital platforms for communication with customers. 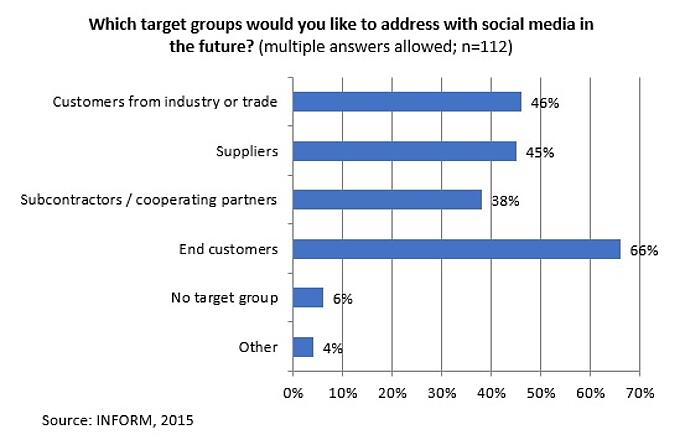 In a direct comparison to the survey results on the same subject from the year 2013, the trend toward a variable usage of social networking services is evident: the percentage of those who use social media for both internal and external processes has increased from 31 to 40 percent. Well-established channels, such as Facebook (67%), Xing (64%) and YouTube (53%) are evidently favored. Those tools not only remained at the top of the preferred networking services, they also experienced significant growth. 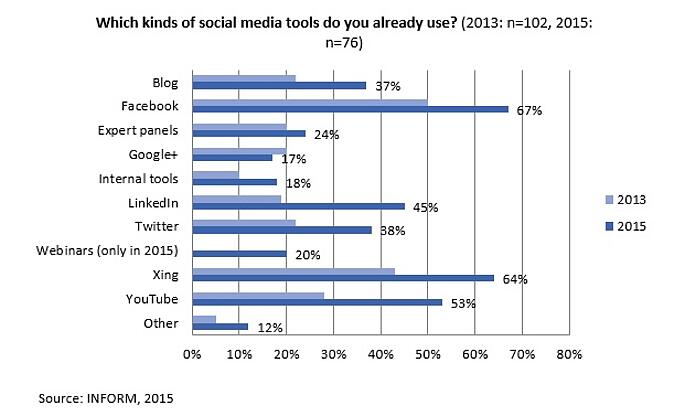 Slight growth despite lack of knowledge

In the logistics sector, only a slight growth can be noted despite a positive expectation. 36 percent use social networking services in supply chain management, 21 percent in their purchasing departments and 20 percent in transport logistics. The survey results also reveal new areas with great future potential and increasing significance: 65 percent, which is the majority of the recipients, see in the next three years the greatest benefits in using social networking services in the areas of courier, express and package delivery services.

However, the company representatives have reasons not to use social networking services in their businesses. In 2013, 33 percent of the respondents stated that the main arguments against social media were questions of security (25 percent) and the lack of knowledge regarding how to use them. This year, the lack of expertise also constitutes the main obstacle in applying social media solutions: 60 percent of the survey participants reported a lack of know-how as the main hindrance for implementation.

More than 50 percent recognize the need for action

"The amount of companies actively using social media has only slightly increased since 2013", summarizes Ludger Schuh, director of the Inventory & Supply Chain division at INFORM and the spokesman for this survey. "On the other hand, the interest in long-established tools such as Facebook, Xing and YouTube has significantly increased. I am surprised that the knowledge how to optimally use social media is lacking in 60 percent of the companies we interviewed. They could profit in so many fields enhancing them through social media, above all in communication with partners, public relations and knowledge management. It is the call for further improvement in German logistics." With 53 percent, more than half of the company managers agree with Schuh and see the need for action in their companies.

The online survey "Social media in logistics" was created in cooperation with the specialist magazine LOGISTIK HEUTE ("Logistics today"). A detailed article about the survey as well as further charts are available upon request at inform@maisberger.com.

Do you have questions, comments or require more information? Please give us your feedback!