We had the opportunity to tour the Port of Rotterdam’s Innovation Quarter in November 2019 as part of the Smart Digital Ports of the Future Conference, and what struck us the most was the sheer quantity of 3D printing startups. One in particular was RAMLAB, who had successfully printed the first marine propeller using a robotic welding arm “printing” in metal. Full disclosure, seeing that printing arm in action was the catalyst for this broader piece on 3D printing. Digging into the uses of 3D printing in maritime, however, we’ve found that almost all of the use cases are focused on the production of spare parts.

This article is part of a broader series on 3D Printing for Maritime.

Let’s pick up this piece with RAMLAB from above. RAMLAB was the first startup to successfully 3D print a propeller for a ship completing their proof of concept – if you will – allowing the startup to move into the refinement and scale-up phases. While they’ve still got some work to do, they’ve shown that they can reduce the time it takes to produce nearly any metal spare part, on premises, from a matter of weeks (traditional manufacturing can take up to eight weeks to produce a propeller, for example) to a matter of days. RAMLAB estimates they can complete the printing of a propeller as quickly as nine days. 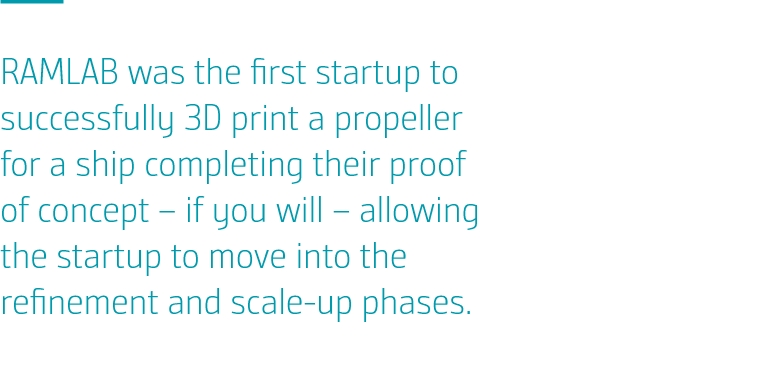 Rotterdam isn’t the only place that 3D printing innovation is happening, either. The Maritime and Port Authority of Singapore, among others, is innovating in this space. Classification giant, DNV GL, is already engaged in research for MPA Singapore regarding the printing of metal equipment for shippers. Further still, Singapore has already built a 3D printing plant alongside port giant PSA at their Pasir Panjang Terminal.

Many arguments abound regarding the impact such developments will have on the broader spare parts industry and the flow-on impacts to ports. Many argue that 3D printing will result in a paradigm shift whereby current spare part manufacturers and patent holders license CAD designs to ports/shippers who can then have them printed where, and when, they are needed.

And sometimes, they are needed at sea. It isn’t inconceivable that ships will have 3D printers on board, allowing them to print parts even at sea. The US Navy is trialing the use of 3D printers onboard vessels at sea. While the applications are still very limited (again, think spare parts), they are making early progress, and the ball is rolling, so to speak.

Like shoes in 3D printing for retail, ship designers are able to use 3D printing in prototyping to speed up the design process. This, combined with the slow emergence of 3D metal printing techniques, will speed up the manufacturing process. It is still early days, but US-based 3D Systems that are partnered with a local shipbuilding company are aiming to revolutionize shipbuilding at a level on par with the invention of nuclear-powered ships.

Finally, the last example is the printing of a complete boat by the world’s largest 3D printer completed by the University of Maine. The 3D printer uses a special polymer and is capable of printing objects as long as 33m (100ft). It took just 72 hours for them to print a 7.5m (25ft) patrol boat.

Projects like that completed by the University of Maine begs the question, is it just spare parts that we will be able to print in the future, or does maritime need to think more “outside of the box”?